—by John Fortunato, October 14, 2011
Found at The Aquarian Weekly
An eclectic array of hardened beer enthusiasts converged at popular Park Slope, Brooklyn, music club Southpaw to try some of the best offerings ever available under one roof. From the righteously stylized to the diligently experimental, Freaktoberfest 2011 had something for everyone this breezy Friday evening. Trendy Black IPA’s and sour ales generally took a backseat to prodigious dark ales, autumnal pumpkin-spiced concoctions and some frolicking, fruited fare.

Another seasoned DIY-spirited maverick perusing Southpaw at this gathering was Gotham Imbiber web host Alex Hall, a ‘real ale’ fanatic, promoting not only cask conditioned libations but also a new Massachusetts brewery whose inspirational English-styled ale got the party started for yours truly. I immediately make my way through the crowded front hall at around 7 p.m. with fellow beer enthusiast Dennis Flubacher.
Making me feel like a privileged rock star, New York City Homebrewers Guild President Chris Cuzme recognizes me upon entering and welcomes us to the main open area post-haste. Now lobbying for Massachusetts’ newly operational Wandering Star Brewery, the long-time beer maven (and professional musician) proudly serves us samples of the perfectly rounded Wandering Star Mild At Heart—a creamy schwarzbier-like English dark mild with crystal-malted dried fruiting and caramel-burnt chocolate spicing.
“There were three licenses supposedly readied for brewers,” Cuzme says as we work our way over to the opposite side of the table to quaff Two Brothers Heavy Handed IPA, a wet-hopped dry body with peach, pear, orange and tangerine fruiting emanating from Illinois. “But Massachusetts’ ridiculously antiquated laws could be a drawback to getting a brewery started. The state changed the way to determine what qualifies as a farmhouse brewery. Sam Adams and Harpoon qualified previously. At court, we argued that growing hops and barley on premises should let us qualify.”

Opened June, 2011, Wandering Star’s all-star crew includes above-mentioned cask ale expert Alex Hall, whom I didn’t get to speak to even though our elbows rubbed during dangling conversations.
Between sips Cuzme declares, “We’re really proud of our traditional mild ale. We try to give our beers extreme flavor without extreme alcohol. At the moment, we’re working on a Lemongrass Wit brewed with cardamom and lemongrass. Then, there’s a spelt-grained Saison and an Alpha Pale Ale that hasn’t been tapped.”

Excitedly, I encounter the Shmaltz homebrewer table to taste a few one-of-a-kind ‘gypsy brews.’ These so-called gypsy brews, generally local craft beers with no permanent home base made at the whim of adventurous zymurgists, prove the entrepreneurial American spirit hasn’t died yet.

Shmaltz loves to promote home brewers. And a few scored high. The most ‘active’ amateur brewer at this evening’s event may’ve been Fritz Fernow, whose cool website, fritzbrew.com, features a Beerography and Beerjoints section. His Shmaltz-sponsored Horny Ryenocerous Rye IPA was aimed at “people who like to geek out on hops,” Fernow claims. “There’s Chinook and Magnum bittering hops. Then, for flavoring, Centennial hops were used. Aroma hops include Citra and more Centennial. Then it’s dry-hopped with Simcoe and Amarillo,” the cordial Fernow explained like a well-versed pro. For me, the final product loaded lemony grapefruit rind bitterness atop caramel-roasted crystal rye malts.

Also worth investigation was Zomerfest, a homebrewed Dutch twist on a German ale. Its crisp lemony entry and almond-toasted easement picked up citric-floral nuances from Sorachi Ace hops, leaving a nifty gin and tonic finish.

For dessert, I choose a tremendous cocktail-like elixir from a tiny Detroit suburb and a magnanimous barrel-aged tonic celebrating Shmaltz’s 15th anniversary.

I’d met the Kuhnhenn family (father Eric and sons Eric and Brett) at their intimate Warren, Michigan, brewery several times in the past. And it was great to have them here in New York, even if they didn’t know where their serving table was assembled. Though I did find Kuhnhenn’s station unmanned, a leather-jacketed dude thankfully started pouring Dennis and I a few samples of the excellent Kuhnhenn Extraneous Ale. Months of aging changed the profile, complexion and complexity of this wonderful ‘big beer.’ While its original tapped version provided a heady bourbon piquancy and Cassis-like blackberry curdle, tonight’s vintage tasted like a Mai Tai with its coconut-pineapple conflux, caramelized whiskey malting and candied apple sash.

As mustachioed emcee Donny Vomit proceeded to juggle knives and swallow a fake sword in honor of Coney Island Sword Swallower Pale Lager, I finished up my samples and grabbed some Chinese food across the street before heading home. Without a doubt, this was one of the best beer-related gatherings I’ve ever attended. Can’t wait for next years’ shindig, wherever it’s at.
Posted by eby harvey at 12:43 PM 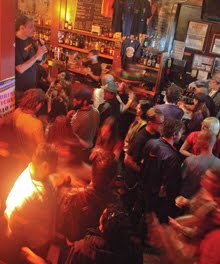 Donny Vomit with the performers 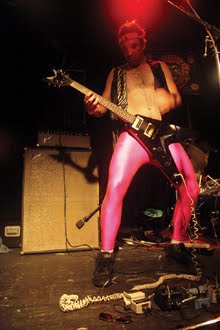